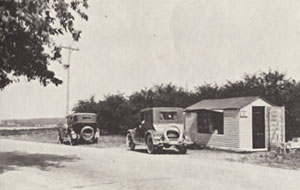 In 1896, A.L. Hatch & Professor E.S. Goff began planting cherry trees on land stretching north of the city of Sturgeon Bay. One by one, new orchards were planted farther north up the peninsula by men who had faith in Door County's special fitness for growing fruit.

By 1909, the bountiful cherry crops had received national attention and a boom in fruit growing began. A number of large corporations started planting hundreds of acres. The first such corporation was the Sturgeon Bay Orchard & Nursery Company. Years later, over 3200 acres had been planted. In 1917 it took around 230 railroad cars to haul the harvest to markets. 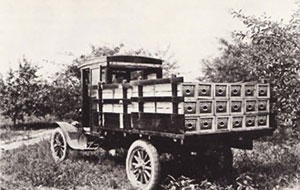 In January of 1918 a group of growers organized The Fruit Growers Canning Company to create another outlet for cherries besides the fresh market. With the prediction of a large cherry crop in 1919, pickers were recruited and brought in by train and steamboat. With the cannery, larger amounts of cherries could be handled in a day. A pickers camp was opened up at the county fair grounds, housing 400 boys.

In 1922, the University of Wisconsin Peninsular Experimental Station in Sturgeon Bay began research work on the cherry crops.  They continue to work, to this day, on insect, disease & cultivar problems associated with growing fruit. 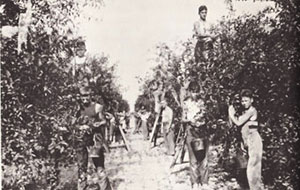 By the time the cherry industry had expanded to over 10,000 acres, it became a challenge to maintain a large enough work force. The Peninsular Station started an active program with the University of Wisconsin Agricultural Engineering Department to develop a mechanical cherry harvester.

A limb shaker with two wrap around wings started replacing some of the pickers. The shaker grabbed major limbs and the vibrations caused the cherries to fall on waiting canvases. The present shakers attach to the tree trunk and need only one shaking instead of each major limb.

Today, a mechanical cherry shaker can harvest 60 to 100 trees in an hour. After shaking, the cherries are immediately cooled in chilled water. This preserves the tree-ripe freshness of the fruit. The cherries then move quickly through the processing facility where they are pitted. Some are sweetened or left unsweetened, and then frozen to preserve the outstanding quality of the Wisconsin red tart cherry.

Harvest and Pick Your Own - Many of the orchards in Door County are anticipating this year's harvest to occur from mid to late July. Orchards further south on the peninsula will typically see an earlier harvest than the orchards in the northern portion of Door County. We are all looking forward to the sweet and tart cherries that will be available soon on entire peninsula. The typical cherry harvest lasts for about 3 weeks, so there may be cherries available farther north into the first-second week in August. 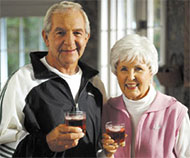 Learn the health benefits of incorporating cherries into your diet.